Take a moment to step back and think about how you work.

You probably start your day with a cup of coffee while catching up on email. You open a few tabs, check Slack, and maybe hop on a Zoom call or three with your team.

After a while, you dive into your “real work.” But that only lasts until you get interrupted by an “urgent” email, Slack, or Instagram notification. On and on it goes.

In short, most of us spend the majority of our work day multitasking.

Does multitasking make you more efficient?

The short answer is, no.

Multiple studies have found that when we constantly indulge in jumping from one task to another — called task switching — we become less efficient and are more likely to make mistakes.

A study from 2012 found that just sitting near a multitasker lowered students’ reading comprehension scores.

Media multitasking — using multiple devices at the same time, like texting while watching Netflix — lowers your attention span and worsens your working memory.

We’re just not built to focus on more than one thing at a time. Yet for some reason…

It’s estimated that multitasking costs the U.S. economy over $650 billion a year. So if multitasking is so bad for you, why is it so hard to stop?

Why can’t you quit multitasking?

The simple answer is that we’re addicted to it. Thanks to sweet, sweet dopamine, our brains are overachievers (and a little bit lazy). We just looove the idea of doing two things at once, even if it makes us worse at both of them.

Dopamine is often called the “reward” chemical because of how it makes us feel. When we “do something right”, like completing a task, we get a hit of dopamine, and it makes us want to do that thing again.

Dopamine is what makes almost everything addictive — from slot machines to social media and your inbox.

And that’s the problem. Because our brains don’t really care what we do. Dopamine is so powerful that we just want to keep doing whatever it was that made us feel so good, regardless of our long-term goals.

Dopamine is why you get distracted by a pop-up Twitter notification while writing an important client proposal. You don’t really care what the Kardashians are up to, but dopamine you get from that little alert sound has already sparked your curiosity, so the craving to check your phone is too strong.

Who is the notification from? Did I go viral? Is Kanye releasing a new album? Am I canceled?

You stop by for a quick peek (“just two seconds!”), and get a rush of dopamine when you scroll. Before you know it, an hour has flown by and you’re knee deep in rabbit-hole of useless information.

And you haven’t gotten your important work done.

The prefrontal cortex is the area of our brains that helps us pay attention to a given task.

It feels like you’re doing two things at once, but the reality is that’s not how our brains work. You’re really just switching between the two sides of your prefrontal cortex. And remember, that “switching cost” can cost you a whopping 40% of your productive time.

It’s like changing lanes to weave through traffic. It feels like you’re making progress, but you’re really just wasting a ton of energy.

And it gets worse when you try to do two complex tasks together.

The truth is that we can only do two things at once when the cognitive load for at least one activity is low. Listening to your favorite podcast while washing dishes is no problem. But paying attention in an important client meeting while responding to an email?

That’s a bit too much for your brain to handle.

We live in an “always on” workplace. Most companies reward immediate responses to emails and other team messaging tools. You’re prompt. On the ball. Committed to the grind.

It’s a badge of honor to be always available. It’s uncomfortable to say “no” if one of your coworkers wants to “hop on a quick call.” You’d rather stop what you’re doing than seem like you’re too busy. Even if you’re in the middle of an important task.

51.5% of workers in a RescueTime study admitted being frequently disturbed in the office. Yet only 13% had spoken to their boss or colleagues about being interrupted while working.

So, what can you do to ignore distractions (including your boss!) and prioritize your most important tasks?

How to ditch multitasking and create room for deep focus instead

It’s hard to stop multitasking. We’re rewarded for being busy (or at least looking busy). And it’s easy to think, “I’m getting so much done!” when you have a bunch of windows open on your screen.

But doing one thing at a time is often the simplest and most effective ways to boost your productivity. So close those browser tabs, put your phone on silent (and turn it over), and prepare to change the way you work.

Here are a few ways you can stop multitasking and finally start getting stuff done.

Is your to-do list crammed with 50 things that you want to do each morning?

It’s ok if your to-do list is massive. But if you want to make progress on all those tasks, it’s important to prioritize the most important things.

Diving into a massive list every morning won’t work. It’s too easy to feel overwhelmed, anxious, and pretty soon you’ll find ways to distract yourself. Instead of trying to “do all the things”, add a step between listing everything you have to do and prioritize the 3 most important tasks on the list.

Assign a number to each task on your to-do list. Which task will you do first? Once you’re done with the first task, then (and only then!), move on to task number two.

Prioritizing your to-do list helps prevent multitasking by removing the temptation to do the easiest, low-focus, unimportant task — like checking email — first thing in the morning.

#2: Block out time for deep work and email

Want to feel less scattered throughout the day? Stop checking notifications whenever they pop up.

Mute notifications on your phone and desktop and set an alarm for a specific time to check your email, Slack, and other applications. Interruptions happen, but it’s impossible to get into a flow state when you get interrupted every 5 minutes.

Cal Newport, the author of Deep Work, suggests most people struggle to get into deep focus because they can’t detach themselves from distractions:

Efforts to deepen your focus will struggle if you don’t simultaneously wean your mind from a dependence on distraction.”

Try to batch communication and set expectations with clients and co-workers for when you’ll respond to reduce unnecessary interruptions. Your creative energy will thank you. And remember, few things are so urgent that you have to handle it immediately.

#3: Use tools to your advantage

Productivity tools can be a double-edged sword. They enable us to do more work, but it’s easy to get lost in the customization and multitasking features, notifications, and endless menus.

So, what do you do? Turn the tables.

Use the software to your advantage. Install a website blocker, like FocusTime or StayFocusd to block distracting websites. You can also snooze alerts in most productivity platforms or set them to deliver at a certain time of day — almost like a daily brief.

If your smartphone is your poison of choice, install apps like Forest. This app “kills a tree” every time you leave the app to doom scroll. Talk about motivation!

‘Mono-tasking’ is a habit

The modern workplace was already a magnet for distractions. Then we all started working in our pajamas.

It’s hard to stay focused for long stretches of time, and it will take practice to master. But like all good habits, it’s worth the hassle.

It’s ironic, but focusing on a single task and slowing down can help you get more done and feel more rested while doing it.

If you want to stop multitasking and experience the benefits of deep focus check out our course — Simple Habits. Learn how to stay focused on your goals, create a habit plan for the first 30 days (and beyond), and get true accountability from people on the same path as you.

You have the potential to create lasting positive change in your life. This course is filled with strategies to help you push through procrastination, stay motivated, and keep yourself accountable to build habits that last a lifetime. 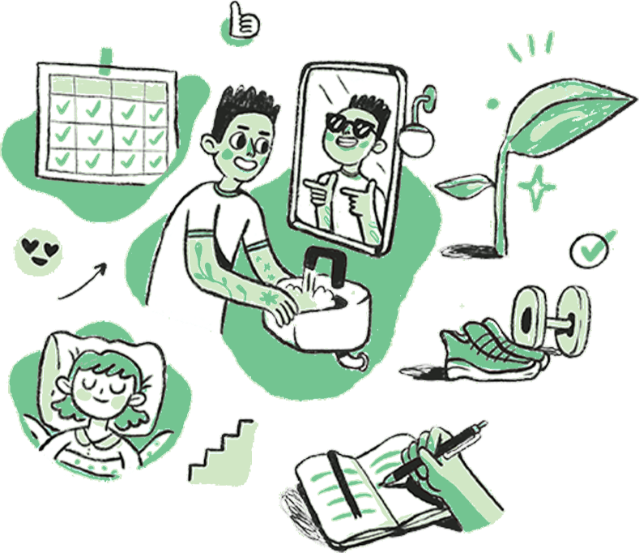 This universally solid advice proves that rules don’t have to suck.
END_OF_DOCUMENT_TOKEN_TO_BE_REPLACED No risk, no reward. Here’s how to access the extraordinary opportunities outside your comfort zone.
END_OF_DOCUMENT_TOKEN_TO_BE_REPLACED